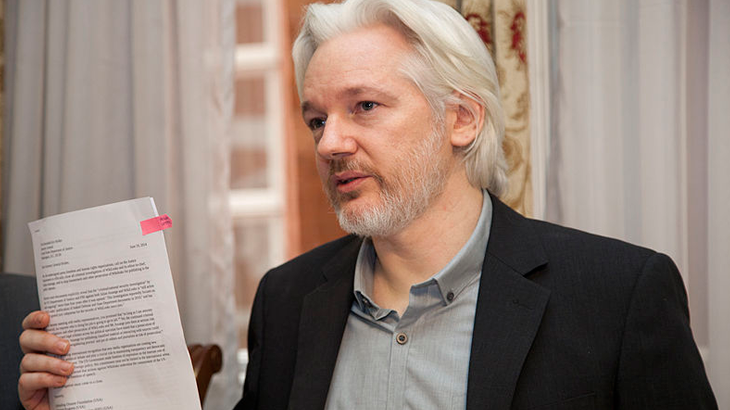 His imprisonment by UK is an attack on journalism & publishing freedom

On 8 June 2020, responding to a question in the House of Lords about the United Kingdom’s stance regarding the protection of journalists and press freedoms, Minister of State Lord Ahmad of Wimbledon said, “Media freedom is vital to open societies. Journalists must be able to investigate and report without undue interference”.

We, the undersigned, agree with this statement and call on the UK government to uphold its commitment to press freedom in its own country. At the time of Lord Ahmad’s remarks, WikiLeaks publisher Julian Assange had been imprisoned on remand in the high-security HMP Belmarsh for more than a year as he faces extradition to the United States on charges of publishing. We call on the UK government to release Mr Assange from prison immediately and to block his extradition to the US.

The US government has indicted Mr Assange on 18 counts for obtaining, possessing, conspiring to publish and for publishing classified information. The indictment contains 17 counts under the Espionage Act of 1917 and one charge of conspiring (with a source) to violate the Computer Fraud and Abuse Act, which uses Espionage Act language. This is the first ever use of such charges for the publication of truthful information in the public interest, and it represents a gravely dangerous attempt to criminalise journalist-source communications and the publication by journalists of classified information, regardless of the newsworthiness of the information and in complete disregard of the public’s right to know.

On 24 June 2020, the US Department of Justice issued a second superseding indictment against Mr Assange, adding no new charges but expanding on the charge for conspiracy to commit computer intrusion. This new indictment employs a selective and misleading narrative in an attempt to portray Mr Assange’s actions as nefarious and conspiratorial rather than as contributions to public interest reporting.

The charges against Mr Assange carry a potential maximum sentence of 175 years in prison. Sending Mr Assange to the US, where a conviction is a near certainty, is tantamount to a death sentence.

This is an unprecedented escalation of an already disturbing assault on journalism in the US, where President Donald Trump has referred to the news media as the “enemy of the people”. Whereas previous presidents have prosecuted whistleblowers and other journalistic sources under the Espionage Act for leaking classified information, the Trump Administration has taken the further step of going after the publisher.

Mr Assange himself has been persecuted for publishing for nearly a decade. In 2012, with fears of a US prosecution that later proved prescient, Mr Assange sought and was granted asylum from the government of Ecuador, and he entered the Ecuadorian embassy in London. Because the UK declined to guarantee Mr Assange wouldn’t be extradited to the US, the United Nations’ Working Group on Arbitrary Detention ruled that Mr Assange’s detention was indeed arbitrary and called on the UK to “immediately [allow] Wikileaks founder Julian Assange to walk free from the Ecuadorian embassy in London”.

President Obama’s administration prosecuted US Army intelligence analyst Chelsea Manning for disclosing hundreds of thousands of documents to WikiLeaks on the US’ wars in Iraq and Afghanistan, as well as State Department cables and files on inmates at the Guantanamo Bay prison. But the administration, which had empanelled a Grand Jury investigation into WikiLeaks as early as 2010, explicitly decided not to prosecute Mr Assange due to what it termed the “New York Times problem.” As the Washington Post explained in November 2013, “If the Justice Department indicted Assange, it would also have to prosecute the New York Times and other news organizations and writers who published classified material, including The Washington Post and Britain’s Guardian newspaper”.

When President Trump came to power, then-Attorney General of the US Jeff Sessions announced that prosecuting Assange would be a “priority”, despite the fact that no new evidence or information had come to light in the case. In April 2017, in a startling speech against WikiLeaks’ constitutional right to publish, then-CIA director Mike Pompeo declared WikiLeaks a “non-state hostile intelligence service” and said, “Julian Assange has no First Amendment privileges”.

On 11 April 2019, Ecuador illegally terminated Mr Assange’s diplomatic asylum in violation of the Geneva Refugee Convention and invited the British police into their embassy, where he was immediately arrested at the request of the US. Mr Assange served a staggering 50 weeks in prison for a bail violation, but when that sentence ended in September 2019, he was not released. Mr Assange continues to be detained at HMP Belmarsh, now solely at the behest of the US.

Even before the lockdown initiated by the coronavirus pandemic, Mr Assange has been held in conditions approaching solitary confinement, confined to his cell more than 22 hours a day. Now under containment measures, Mr Assange is even more isolated, and he hasn’t seen his own children in several months. Furthermore, Mr Assange has been allowed extremely limited access to his lawyers and documents, severely hampering his ability to participate in his own legal defence. Following a visit to HMP Belmarsh accompanied by medical doctors in May 2019, UN Special Rapporteur on Torture Nils Melzer determined that Mr Assange had endured psychological torture.

Mr Assange’s extradition hearing, which commenced for one week in February 2020 and is scheduled to continue for three more weeks, is set to resume in September. But the coronavirus, which has reportedly already killed at least one fellow inmate at HMP Belmarsh and which continues to spread through prisons at an alarming rate, puts the health and well-being of Mr Assange, who suffers from a chronic lung condition that makes him especially vulnerable to Covid-19, at serious risk.

The continued persecution of Mr Assange is contributing to a deterioration of press freedom in the UK and is serving to tarnish the UK’s international image. Reporters Without Borders cited the disproportionate sentencing of Mr Assange to 50 weeks in prison for breaking bail, the Home Office’s decision to greenlight the US extradition request, and Mr Assange’s continued detention as factors in the UK’s decline in ranking to 35th out of 180 countries in the 2020 World Press Freedom Index.

We call on the UK government to release Mr Assange without further delay and block his extradition to the US – a measure that could save Mr Assange’s life and preserve the press freedom that the UK has committed to championing globally.