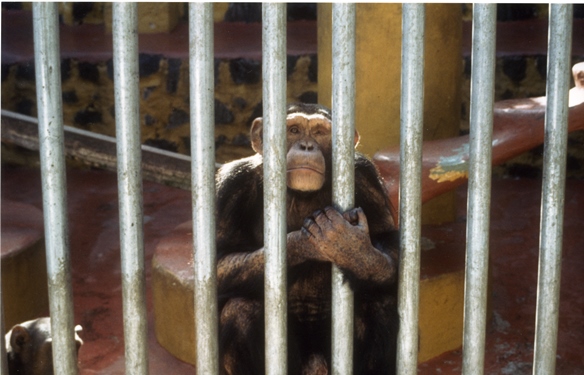 Zoos are jails for animals. They’ve committed no crime but get life imprisonment with no chance of parole. Thinking, feeling, social animals – which normally range over a large and varied terrain – are isolated, caged and treated as objects of human curiosity and amusement. This cannot be morally right.

No zoo replicates the natural habitat of captive species in terms of geography, vegetation, climate and size. In the wild, for example, lions live in family prides and roam over hundreds of square miles of open savannah. In zoos, they are usually confined alone or with one companion in small, bare concrete spaces. The result? High levels of stress, as exhibited by their relentless pacing up and down.

Modern zoos claim to be humane but many exotic birds are detained in garden shed-sized cages with only one or two other avians. They have no space to fly; only enough room to flap their wings for a few feet.

Zebras, camels and giraffes are held in barren enclosures – none big enough for them to be able to wander as they would in the wild.

Some smaller animals are kept in solitary confinement or with only one other specimen; in tiny glass display cases – some only four feet by three feet.

London Zoo has responded to public disgust with the abuse of animals by expanding some of its detention facilities, which it euphemistically calls “enclosures.” It’s Gorilla Kingdom is bigger than the previous cages but it is still a tiny fraction of the territory that gorillas would traverse in the wild. Moreover, it is not the gorilla’s natural rainforest habitat. In fact, it is not forest at all. The unnatural open-plan layout is designed to put the gorillas on public display, so they can’t easily hide away from the zoo’s cash-cows, the staring visitors.

In every zoo, the need for the fee-paying public to be able to see the captive species takes precedence over animal welfare.

The fall-back justification for zoos is conservation. But this is largely PR spin. The Born Free Foundation exposed the often poor conservation record of London Zoo and others in the Consortium of Charitable Zoos. They were found to house samples of only 8% of endangered mammals, just over 5% of threatened birds, a mere 11 of the 1,811 at risk amphibians and only 3.5% of the animals on Red List of Threatened Species.

If conservation work needs to be done, let it be done in the wild or in large enclosures that replicate the creature’s natural environment, family groupings, climate and roaming terrain.

Finally, recent scientific research has confirmed the similarity between humans and other animals, especially vertebrates and mammals. These include varying degrees of intelligence, language, sociability and emotion; including the sadness, boredom, loneliness, stress and depression that is suffered by many zoo animals.

Given this knowledge, it is clear that zoos are unnatural and unkind to animals. It is time to do the right thing. Close them down.