Gay Liberation Front veterans and supporters commemorated 50 years since the formation of the ground-breaking GLF movement. They held a candlelit vigil on 13 October outside the London School of Economics, where GLF had its founding meeting on 13 October 1970.

The vigil was attended by over 30 people and was Covid safe, with face masks & social distancing.

50 years ago, on 13 October 1970, the Gay Liberation Front (GLF) was founded at the London School of Economics. The meeting was called by students Bob Mellors and Aubrey Walter and was attended by 19 people. It soon grew into weekly open meetings attended by hundreds of LGBTs.

“The formation of GLF was a watershed moment in British LGBT+ history. For the first time, thousands of LGBT+ people came out and protested against our persecutors. GLF’s slogan ‘Gay is Good’ challenged the centuries-old view that gay was bad – and mad and sad,” said Peter Tatchell, aged 68, who was an activist in GLF from 1971-74.

“GLF put LGBT+ rights on the public agenda and transformed LGBT+ consciousness, from shame to pride and defiance.

“GLF initiated the UK’s first Gay Pride march in London in 1972. It also founded the first LGBT+ switchboard and the first LGBT+ community newspaper, Gay News; as well as establishing the first counselling service run by and for LGBTs, Icebreakers.

“GLF’s key demands set the agenda for the LGBT+ movement for the following five decades.

“GLF did not seek equal rights within a flawed, unjust status quo. It campaigned for the transformation of society to end straight supremacism and stood in solidarity with all other oppressed people.

“Fifty years on, we honour the heroes of the GLF,” said Mr Tatchell.

“50 years ago, the Gay Liberation Front said come out, change ourselves and revolutionise the world. Joining with other oppressed groups is the only way to work towards real change.”

“GLF stemmed out of Stonewall 1969, which was a riot that took place after centuries of oppression against LGBT+ people. We proved that the authorities will not listen unless we fight back, make a noise and cause a disturbance.”

“For 2,000 years we were told to be invisible. We think of LGBTs in Hong Kong, Poland, Chechnya, Brazil and Indonesia, who seek the dignities that ought not be denied to anyone.”

“The central message of GLF was Gay is Good, accept yourself, come out! We challenged ourselves and others around racism, gender roles, sexism and class. We demanded the freedom to be ourselves, without apology.”

“Gay Liberation was the cosmic big bang beneath heterosexual and gay society with its call to come out – be visible – break the taboo. My sexuality, my chosen gender, is…no-one’s business but mine own.”

“From the outset, GLF had an internationalist perspective. Our interventions for the first time put LGBT+ rights on the agenda of the left, social democratic, liberal and trade union movements in the UK and other countries.” 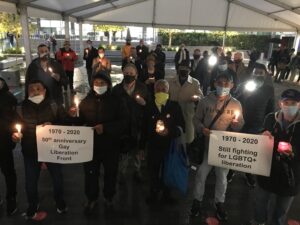 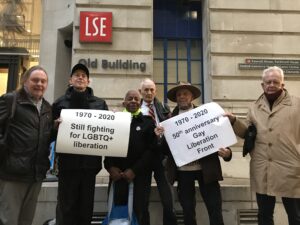