Bid for equality, to end the ban on opposite-sex civil partnerships 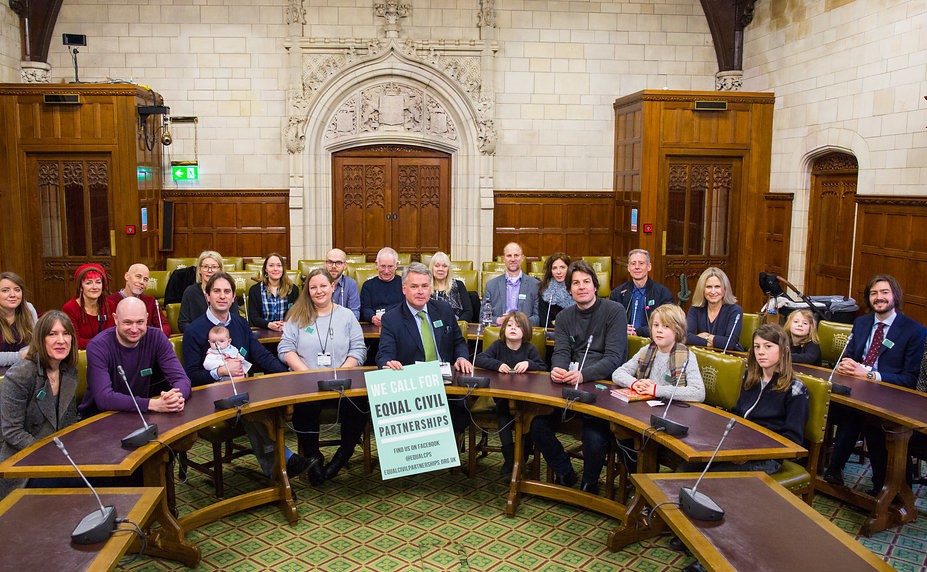 Following recent ministerial changes, the government has gone back on its commitment to support reform. It now wants more time to deliberate. Nevertheless, it estimated that a majority of MPs back equality.

There follows below a briefing for MPs and the public on why they should support the Bill.

A petition calling for equal civil partnerships has over 80,000 signatures.

Peter Tatchell, human rights campaigner, is backing the Bill; having championed equal civil partnerships since they were first proposed in 2003 for same-sex couples only. He said:

“It’s time for ‘straight’ equality. It cannot be right that same-sex couples now have two options, civil partnership and civil marriage, whereas opposite-sex partners have only one option, marriage.

“The government’s public consultation in 2012, involving over 200,000 submissions, found that 61% of respondents supported allowing opposite-sex couples to have a civil partnership. Only 24% opposed.

“In a democratic society, everyone should be equal before the law, with the same rights and responsibilities. It is outrageous that for 14 years successive governments have been unwilling to legislate equality,” said Mr Tatchell.

The founders and lead opposite-sex couple in the Equal Civil Partnerships (ECP) campaign are Charles Keidan and Rebecca Steinfeld.

“Same-sex civil partnerships remain popular in the LGBT community. The number formed in England and Wales rose from 861 in 2015 to 891 in 2016, an increase of 3.4%, according to the Office of National Statistics. There is every reason to believe they would appeal to a sizeable number of different-sex couples if they were legalised.”

“The current situation is self-evidently unfair. Civil partnerships promote stable families and protect children. They should be available to everyone. There is no such thing as common law marriage. This leaves unmarried couples and their children vulnerable.

“Couples choose not to marry for many reasons: its history, cost and past bad experiences. The State’s responsibility is to protect children, not judge their parents: children should not be placed at risk, just because their parents don’t marry.

ECP briefing for MPs and the public

What’s the issue at stake?

Tim Loughton MP – who came fifth in the Private Members Bill Ballot – is introducing a bill on Friday 2 February to extend to opposite-sex couples the same choice of marriage or civil partnership that is currently available to same-sex couples.

This is a minor change in the law intended to address an unfairness and inconsistency arising from other recent legislation.

The current situation in England and Wales

Currently, all couples have the right to marry, however only same-sex couples are able to form civil partnerships.

In 2004, the Civil Partnership Act was introduced to give same-sex couples access to the same legal rights as married opposite-sex couples, but it fell short of giving them the right to marry.

Why does it matter?

Allowing civil partnership for opposite-sex couples would be fair, popular and protect children and their families.

There are almost 2 million children in the UK whose parents are living as unmarried couples.   There are all sorts of reasons why these parents may choose not to marry, from cost to bad experiences to personal choice.

Contrary to popular belief, there is no such thing as common law marriage under UK law.  As a result, when one unmarried parent dies or a couple separates, there is no legal entitlement for assets or wealth to be shared, nor automatic tax relief as there is for married couples and same-sex civil partners. A surviving partner does not automatically become the guardian of the children of a partner who has died regardless of how long they have lived together as a family. This is not only unfair but can also cause huge distress both to parents and children and result in long drawn legal battles even leaving children living in poverty.

Whatever we think of the decisions of couples not to marry, the State has a responsibility to ensure that children and partners are protected.  Providing the option of a civil partnership for opposite-sex couples will make this easier.  Children should not be placed at risk, just because their parents aren’t married.

There are 3.3 million unmarried couples in the UK who would benefit from a change in the law, on average over 4,500 couples per Parliamentary constituency. Over 80,000 individuals have signed a petition in support of a change in the law. So legislation would be popular.

And according to Populus, amongst the wider population, three times as many people support the extension of civil partnerships to all as [would] want to maintain the status quo or abolish them altogether.

There is widespread support across Parliament for legislation to equalise civil partnerships.   Over a hundred Parliamentarians, representing all the main political parties, have publicly declared their support for the campaign.

Labour supported a previous attempt to amend the law in January 2017, while the Liberal Democrats and the Greens proposed legislation in their respective 2017 election manifestos.

While the Government is yet to take a formal view, Tim Loughton, the Bill’s sponsor, is a Conservative, and enjoys the support of prominent backbenchers, including Crispin Blunt, Graham Brady, Dominic Grieve QC and Sir Peter Bottomley.

The Bill is also supported by the Marriage Foundation, which exists to champion long-lasting stable relationships and prevent family breakdown.

In parallel with the political process, Rebecca Steinfeld and Charles Keidan, who together set up the Campaign for Equal Civil Partnerships, have been pursuing a change in the law through the Courts since 2014.

In February 2017, the Court of Appeal said that the current position could not continue indefinitely, but a 2:1 split ruling gave the Government limited time to decide on the future status of civil partnerships, allowing for the possibility that they ‘wither on the vine’.

The latest figures show, however, that there has actually been an increase in the number of same-sex civil partnerships formed in England and Wales, from 861 in 2015 to 891 in 2016, an increase of 3.4. (Office of National Statistics Release, 29 September 2017)

Rebecca Steinfeld and Charles Keidan have now been granted leave to appeal to the Supreme Court and their case will be heard in May 2018, unless of course legislation is passed to extend civil partnerships to opposite sex couples before then.

Four things to do now